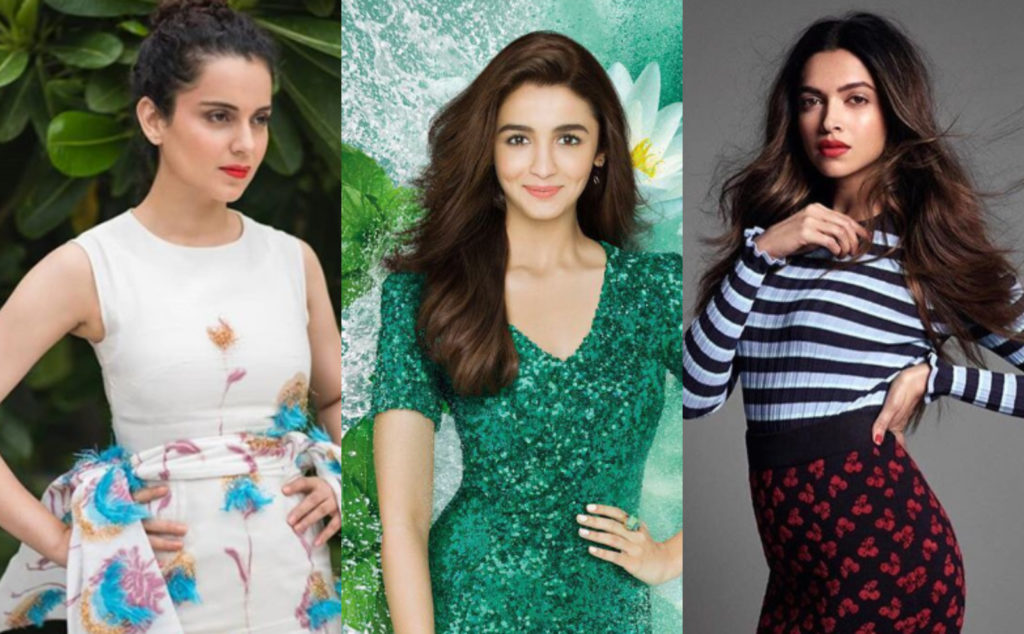 Bollywood is one of the richest entertainment industry in the world where established actors and actresses earn in millions.

Three times National Award winner, Kangana Ranaut is one of the best actresses in Bollywood. Judgemental Hai Kya actress surpassed Deepika Padukone and became the highest-paid Bollywood actress. After the success of Manikarnika: The Queen of Jhansi she is charging Rs 15 Crores per film on an average.

The first actress to rank in top five of the most admired woman list of 2019, Deepika Padukone charge Rs 14 Crores for one film. She is the second-highest-paid actress of Bollywood after Kangana Ranaut. Deepika is one of the finest Bollywood actresses and wons three Filmfare awards. Her upcoming film is Meghna Gulzar’s Chhapak and Kabir Singh’s 83.

International Icon Priyanka Chopra receives a lot of appreciation for her work. Priyanka won lots of awards including one National Film Award and five Film Fare Awards. She was awarded Padam Shri in 2016. The third highest-paid actress charges Rs 13 Crores per film. Her upcoming film is Sky Is Pink.

Read Also: 20 Bollywood Actors who have a successful side business

Bollywood most popular and beautiful actress Kareena Kapoor felt her presence in Bollywood for two decades. She charges Rs 11.5 Crores for a film. She is the winner of six Filmfare awards  Her upcoming movies are Good News with Akshay Kumar and English Medium with Irfan Khan.

Katrina Kaif is the highest-paid non-Indian Bollywood actress. Her one film charge is Rs 11 crores. Katrina will next be seen in cop drama Sooryavanshi with Akshay Kumar.

Daughter of evergreen actor Anil Kapoor, Sonam Kapoor has given mind-blowing performances in her movies and is the favorite of producers and fashion designers. Sonam charges Rs 10.5 crores for her films.

Another in the list is Vidya Balan. She is known for her fine acting skills. Vidya charges Rs 9.5 crores for a film. Her upcoming films are Mission Mangal and Nerkunda Paarvai.

Another Bollywood Diva Shraddha proves her acting skills in many Blockbuster movies like Ashiqui 2, Baaghi and dance movie ABCD. She has a lot of films lined up in her kitty which include Saaho, Chhichhore, Street Dancer, Baaghi 3 and Stree Returns. Shraddha charges Rs 9 crores for a film.

Anushka Sharma is a perfect example of beauty with brain. she has received a Filmfare Award for her performance and was also featured by Forbes Asia in their 30 Under 30 list of 2018. Anushka charges Rs 8 crores for her films.

In the list of top 10 highest paid Bollywood actress, Alia Bhatt is at tenth position. She charges Rs 7.5 crores for a movie. since 2014 she appeared in Forbes India’s Celebrity 100 list. She proves her acting skills in Gully Boy, Kalank, Raazi, Highway and several other movies. Her upcoming movie is Brahmastra along with Ranbir Kapoor.